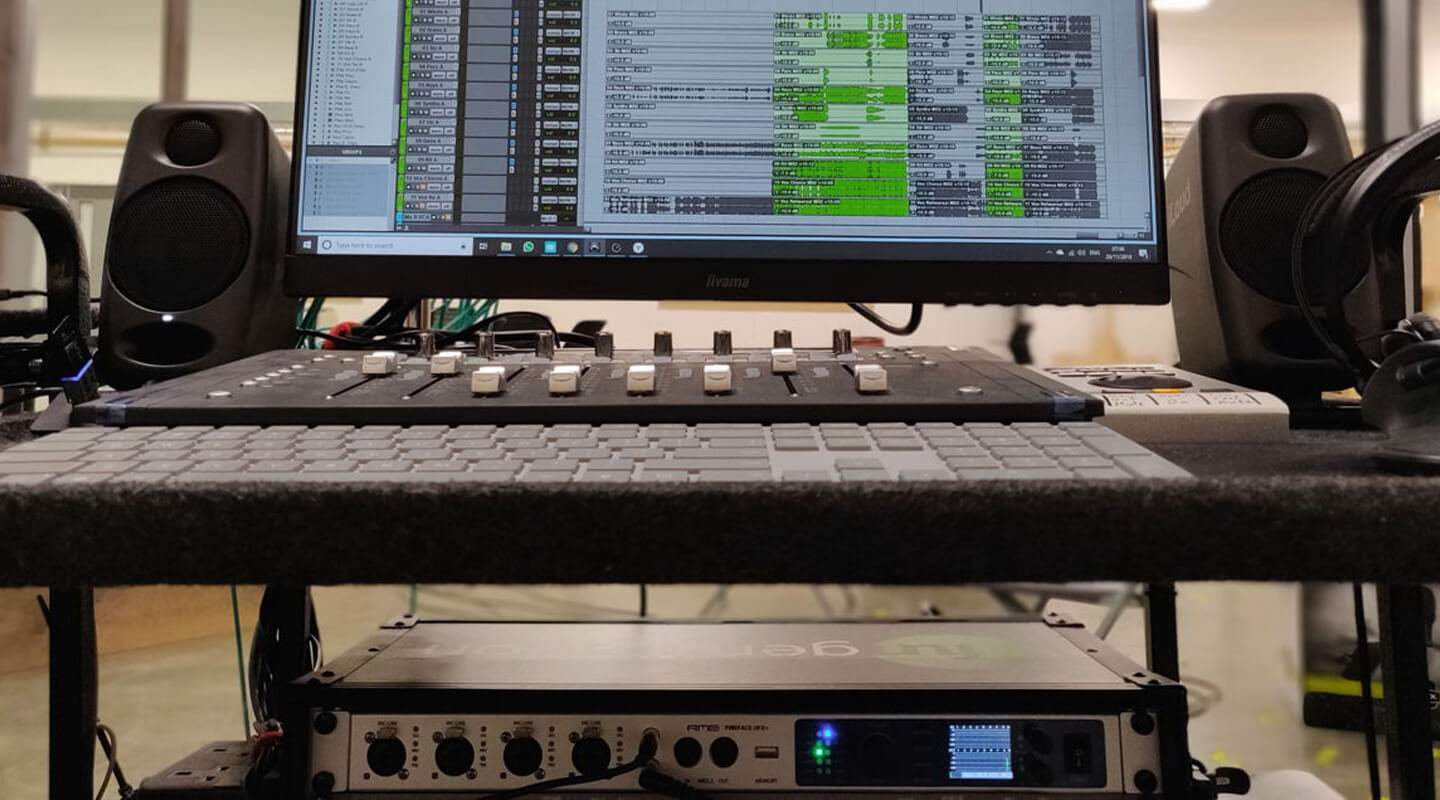 Ever since Victor Chaga began working in the film and TV industry in 2011, he has garnered a long list of credits in-studio music departments in Los Angeles and abroad. Whether working as the score engineer with composer Henry Jackman for Captain America — Civil War, or as a score producer, programmer, and editor on last year's Colette, Chaga has relied on RME interfaces on and off set for the better part of a decade. So, when he was hired to playback pre-recorded material for cast and crew of over 300 people during the filming of the upcoming movie adaptation of Andrew Lloyd Weber's Cats, he added the RME Fireface UFX+ interface to his playback setup to match the scale of the production.

"I chose the Fireface UFX+ specifically for the project, and as an investment for the future," Chaga said, "for the box's versatility, and for its ability to handle most audio and I/O formats.”
Alongside production sound mixer Simon Hayes who was capturing each performance, Chaga relayed playback audio to the entire cast and crew through in-ear monitors, employing each of the interface’s digital and analog I/O options, and using RME's ARC USB MIDI remote control and TotalMix FX software in combination with the Fireface UFX+.

The new film “Cats” is based on characters in T.S. Eliot's Old Possum's Book of Practical Cats, the film's all-star cast includes Rebel Wilson, Idris Elba, Ian McKellan, Judi Dench, Taylor Swift and James Corden. “Usually in musicals, you would record the music and the vocals in the studio, and then by the time you get to filming, everyone mimes to the playback of that material,” explained Chaga. “All the vocals for our film were recorded live, on set, as opposed to being pre-recorded. By having live musicians behind the camera, alongside the playback setup, we were able to provide our cast with the musical support they needed. We really wanted the actors to lead the musical performance and not the other way around.

"An extensive amount of thought and planning has been put into the ability to support the actors musically, and at the same time making absolutely sure they are at no time constrained by the music," Chaga continued, adding that he and his team developed a system that allowed them to seamlessly switch between the live musicians and pre-recorded multitrack stems, and material recorded, on set, during previous takes. “This allows us to instantly adapt to the performance in front of the camera and facilitate requests from actors and production.”
RME’s UFX+ was an integral piece of this puzzle. "Having the standalone features of the interface and the mixing and routing flexibility of TotalMix FX, outside of the DAW, means I can rely on the Fireface as a safety net,” Chaga explained. “If the DAW or the computer crashes, the UFX+ will still pass the live signal to our IEM mixer, Tom Barrow. That could be the difference between saving and ruining a take.”

Chaga also found the ability to lock the user interface extremely useful. "If there are any changes that need to be made, I have to go through an extra step to make them, and once the user interface is locked nothing can be nudged accidentally,” Chaga said. “Having the ability to save and recall snapshots/workspaces means I can trace our workflow all the way back to day one, should I need to. There's no ambiguity."

Used in tandem with the Fireface UFX+, Chaga sets up his ARC USB to control mute groups for outputs, using the jog wheel to control monitoring level, with another button set up to recall the TotalMix FX window in case he needs to make further adjustments. "I think it is quite an elegant solution," Chaga said. “To have only the necessary controls available while removing the ability to unintentionally change anything you wouldn't want to. Overall, the setup has performed beautifully. It is extremely flexible and solid." Looking towards post-production of Cats this summer, Chaga said he's considered reducing the size of his rig for the sake of mobility. But, he said one thing is certain, “wherever I go, the UFX+ interface is coming with me."